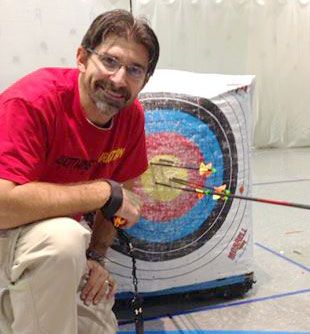 Archery instructor Ben Wilson has been teaching in Worthington schools since 1996 and is currently the physical education teacher at Bluffsview Elementary. He began a successful archery program at Bluffsview in 2011, and other archery programs have since been started in Worthington and the Columbus area. Bluffsview has qualified for the national championships every year since their program began and won the 2013 NASP archery state championship.

For most of his life, Ben has been involved with leadership and worked with children. Whether as a church leader, as a football or archery coach, or as a father, Ben's passion has always been for helping people—youth and adults—learn how to reach their full potential in life. He was the recipient of the 2012 Gary Smith Compassionate Teaching Award. Ben has a dynamic, fun, energetic, personable, and sometimes silly teaching style that makes for a fun and positive learning environment. Simply put, Ben loves to aim high and inspires others to do the same!